First and foremost!  For those of you not in the know a purple butterfly is the symbol for Fibromyalgia sufferers.

Okay, this comic is a little bit silly but so is Lady Gaga (in a awesome way!).  I was not happy to hear that Lady Gaga has Fibromyalgia because I would not wish this condition on my worst enemy.  I am a fan of Lady Gaga and she continued to impress me by turning her suffering into a positive force.  I don’t often talk about my battle with Fibromyalgia on the website because its a constant grueling never ending battle with a faceless enemy.  It’s depressing and that is not the atmosphere I want to create for our comic.

The form of Fibromyalgia I have is rather severe.  I get symptoms in every part of my body and the pain is constant.  I will never be able to leave my house without someone with me because if I fall, I can’t recover easily.  I can’t drive and likely I will never be able to because it would be akin to driving drunk, or worse.  I can’t work any conventional job and as a result I’ve begun the process of applying for disability.  The only hope I have for a career is through my art, but that is a long shot.  (We are actually going to be taking a break from doing this comic to finish up something we hope to find a publisher for.  Scroll down for details.)  Currently I am stuck in my house, unable to leave with only my dog and cats for company during the work day.

If you want to know more about my battle with fibromyalgia, I’m more than happy to share.  I just don’t want to bog this comic down too much.  I worked too hard on the coloring job to depress everyone 🙂

I just want to say thank you to Lady Gaga for using her fame to bring attention to a chronic condition that nobody knows much about.  Funding research is EXACTLY what we need because currently we don’t even know what causes this condition or how to properly treat it.

Lady Gaga, if you are reading this; if you need anything for this battle you are waging all you have to do is ask.  I want to fight this in any way I can.

Remember Fibromyalgia sufferers, the only way to deal with pain is to laugh.

I am announcing that random-encounterz will be taking a break from our regular online comic posts until the beginning of the New Year. We are currently working to finalize the first chapter of a graphic novel that we are seeking to publish. We will still be posting occasional images, and updates from our progress on the graphic novel. Wish us luck, and we will see you guys in the new year!

Nostalgic for some, nightmare for others.

Here’s a portrait of myself. This one is much closer to my actual self, in real life.

A drawing of my beloved Tea.

This comic is an anthropomorphized version of your allergic reaction. Allergic reactions are basically your body overreacting to the presence of a particular allergen, which your body reacts to by effectively attacking yourself. It’s like your own body is giving you a beat down, from mild to potentially lethal. Our immune system is just weird like that. 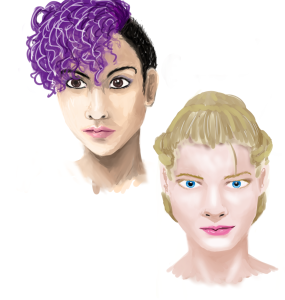 I drew an old character’s of Tea that she requested, to see what I could draw of her more seductive characters. It was a fun little sketch to do. Something to distract me from the existential horror that is going to be next week’s comic. In addition Tea continues to work on and post her coloring, which is fabulous. Featured this week is a character named Alyx who we are exploring as a half Japanese/British, that was formerly just British. And then there is Thyra, a female knight that’s part of the story we continue to work on.

If Wolfenstein or the new Call of Duty are any indication, then they’re still going strong as video games #1 Cannon Fodder.