So while I was ranting about a quote from Jim Sterling’s video about Evolve’s DLC the insightful Talarian asked: 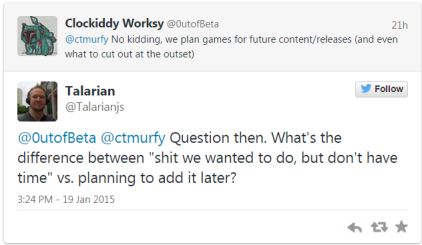 Sadly the question requires more than 140 characters to answer so I delayed for time and scrambled over here to hash something out. The question makes a good point, it’s difficult to say when something was cut because the developer ran out of time because theoretically the developer would throw everything in if time and money weren’t a factor and when it was a feature that was simply planned to be added later.

The triple-A video game development model is an entirely commercial thing, but we players like to indulge in the illusion that developers are cool people who aren’t trying to attach to our wallets like a mosquito. Many of them aren’t, but the modern reality of keeping a game studio open means the studio has to figure out ways to pay its bills. So every studio has to at some point ask itself how it’s going to get a return on their game. That was never in question, we live in a commercial world. However, some of those take it a dozen steps further and stop making it about “Lets aim for the stars and make the next WoW!” and take it to “So how can we maximize profit off the sheep players?” The trick is not making it obvious where on that spectrum your company lies. When you are using every possible means to generate revenue from players, we get suspicious.

I think it comes down to the intention of the developers when they are making the choice as to whether or not include a piece of content. If the developer is genuinely out of money to dedicate and needs to release, I see no problem with cutting content that they simply can’t pay for. If they are being held to a strict release date and can’t postpone any further I am also less critical. Though in “the olden days” plenty of developers would postpone releases to finish a game; these days it seems marketing and corporate controls when things get released, not whether the game is finished and tested (I’m looking at you Assassin’s Creed: Unity).

However, if the developer has already finished the majority of the content piece and will have it ready for release soon after and hold it back purely to sell it for more later, then I start to get a little annoyed. What constitutes an acceptable time period or amount of content is entirely subjective of course. I mean, in the case of Evolve they are literally increasing your eventual cost for content if you fail to pre-order. Now in some situations ordering something before release can be good, but in most of those the quality of the product is highly likely. The video game industry on the other hand has routinely been shown to release shoddy products after large amounts of hype to encourage pre-orders.

Planning to expand your game in the future isn’t a crime, but at the same time, charging people an upfront fee that is only getting them a relatively small portion of the intended total content (with a penalty if they do not pre-order) breaks that consumer illusion that the company isn’t seeking to exploit us. Your price model should reflect that intention, which should mean charging a smaller initial fee.

Developers should aim high. At the risk of sounding idealistic there is nothing wrong with wanting to be the next WoW or LoL, but there is a difference between trying to make something great and trying to nickel and dime your customers. Where that line lies is subjective, you the player have to decide whether you are getting the value your money is worth.

via Out of Beta: Phantasms of Commercialization.

One of the key differences I’ve encountered when playing Dragon Age Inquisition was the feeling that my character was just a stand-in for myself rather than me stepping into the shoes of some figure in Thedas. In Dragon Age: Origins the player experienced a brief tutorial/backstory event, determined by their race/class, that explained how your character ended up in the Gray Wardens. The experience primed me on how my character might view the world.

Each intro gave the player a different experience and outlook on society in the setting. After each I felt like I had a grasp of how my character might react to various situations. My city elf, fresh from a scumbag human noble’s attempt at prima nocta, had little patience for the human king, while my recently deposed human noble found hope for revenge for his family. With each I felt like I was playing a character who had a story, goals, opinions, and feelings. Yet even though each one gave a framed view of the world the player could still decide how they would react. For example, my City Elf could choose to still believe in the good of humans, or become resentful at the injustice she faced.

In Dragon Age 2, this was toned down because the player was set in the role of Hawke, but the introductory sequence did give you some impression of who Hawke might be. Oddly enough, in their attempt to make the player feel more connected to a character they achieved the opposite result and left Hawke feeling a little hollow.

Inquisition did away with the introductory sequence and instead dropped you into the shoes of a race/class combination with a brief backstory. Now I understand that Inquisition’s storyline required the player to be in the dark, but as a result I had no framework with which to build my character. I was placed into a hollow shell, meant to be filled, but in a game where there are choices that are much more wrong than others the RP potential is sacrificed on the alter of min-maxing. Now we can say that the player is making that choice, but it means the game is, at times, punishing them for playing a character.

Were I a new player to the series, I would not understand the experiences of the various races. A new player won’t have much grasp of how the Dalish elves view Thedas after only a few paragraphs, nor the somewhat alien philosophies of the Qunari. In an attempt be more of a blank slate, the game’s setting loses it’s engrossing appeal. Origins encouraged me to play new characters to experience Thedas from their perspective, while Inqusition does not offer anywhere near that experience. There is little reason for me to replay the story; we all get to the same results anyways. They toned down the setting so much that I think it lost it’s life. Perhaps some players like that blank slate, but for me it disconnected me from the experience.

As I said, now my hollow husk of a character just picks the options that seem most likely to appease my companions because their approval as become a form of min-maxing. Instead of someone with conviction and drive, I become sycophant to my companion’s opinions. The binary approval system walks hand in problematic hand with the lack of character building. But that is a topic for another time.

Posted by Clockwork at 4:45 PM

A new player to Warlords (do those exist?) would have to be forgiven for having absolutely no idea what Daily Quests are. At level 100 I see at most a handful a day and most of those are optional quests from the Garrison. This fictional new player would have no idea that at one point in WoW’s history (amusingly enough, when WoW was taking place in Draenor’s alternate history predecessor, Outland) a player could expect to _FILL_ their quest log with dailies during any particular day. Expansions since Cataclysm have pared down the bloat. Truth be told I like not having an entire quest log to grind through every day; the fewer daily quests feel like they give me more meaningful and open-ended, “Do whatever the #$%@ I want” sense of accomplishment. There’s just one more tweak I wish Blizzard would make.

Before you call me a whiner or blithering idiot, this is a change I am essentially stealing from another game. Not that there’s anything wrong with outright stealing gameplay ideas when they work, but I admit I feel a smidgen of guilt at suggesting one game I play steal from another when they’re in direct competition for my (and everyone’s) attention.

That moral quandary aside, I want Blizzard to treat the new “Go kill ~100 things in X area” quests like Final Fantasy XIV treat it’s daily Hunts. For those not familiar, FFXIV gives you a daily set of Hunt Marks at level 50. Hunt Marks are essentially quests that involve “Go to place X, kill X things.” You can only have one set on your character at a time, but you can pick up that day’s even if you had yesterday’s on you, one you complete yesterday’s. So if on Monday I pick up my Hunts but end up setting my face on fire and don’t get a chance to play, I can login on Tuesday and go murder whatever random mobs Monday’s hunt directs. Then I can turn in the hunts from Monday (actually they auto-complete but it’s the same idea) and promptly pick up Tuesdays, allowing me to do effectively two days of hunts in one day. However I haven’t actually GAINED any extra hunts, I just didn’t miss out because one day I couldn’t.

Now, making it so that you could just keep picking up dailies and do them all at a later date would be a bit much, but giving people a one day grace period helps alleviate the feeling that I am punishing myself by missing on the largest apexis shard injection per day. Wanting players to login daily is one thing, but the time investment it takes to do the apexis shard quest makes me want to just say “Screw it…” more than it makes me want to stick around and play.

Posted by Clockwork at 5:42 PM

via Out of Beta: [WoW] A “daily” adjustment.