Random Encounterz is a comic about the random encounters of life, video games, cartoons and comics. Its drawn by two artists; Yuji and Tea, and written by Tea, Yuji and Bear. Their love for each other blends their cultures, friends, real life, imagination and wishful thinking.  This is Random Encounterz… Roll D100…

Every Tuesday the comic posted is illustrated by Yuji.

Every Thursday the comic is illustrated by Thyrza.

Every Sunday by either Tea or Yuji, depending on work schedules and fibro pain.

Thyrza was raised by her mother and father amid the gaming culture of Seattle, Washington.  Her earliest memory is of sitting on her fathers lap while he is DMing a Dungeons and Dragons game.  She has been drawing and writing stories since she was a little girl.  Despite her love of art and storytelling, after she graduated high school she attended community college with the eventual goal of becoming a K-8 teacher.  Shortly after she finished community college she was diagnosed with Severe Fibromyalgia.  Thyrza spent the next several years learning how to live with her condition.  Eventually, she entered the University of Washington School of Art program.  The plan was to receive her bachelors degree and go on to get her masters in Education.  Despite graduating, the dream of becoming a teacher was shelved because she cannot work at a job that requires her consistent attendance.  Unable to find a job suited to her needs, Thyrza has decided to return to her passions and create her own. 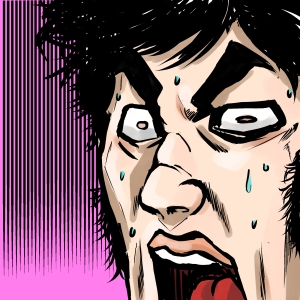 Yuji is a Japanese American born and raised in Seattle WA, by his Japanese mother from Hokkaido, Japan and American father from Colorado. Raised on both American animation and Japanese Manga, he found inspiration to draw from a very young age. A recent graduate from the University of Washington with a BA in Painting and Drawing, he’s found joy in both serious works and more absurd comical styles. Anything goes with Yuji in terms of subject matter and genre so long as he can find it enjoyable and thought provoking. A favorite pastime is to unnecessarily over analyze the shows he’s seen and the comic books he reads. His favorite comics include Blade of the Immortal, Vagabond, Jojo’s Bizarre Adventure, One Piece, and Berserk. His favorite authors are James Joyce, Natsume Soseki, and H.P Lovecraft. His favorites films are Pulp Fiction, Dark City, The Thing (1984), and The Big Lebowski. He wishes to write a series of comics in the near future and seeks to get started through web comics.

For the purposes of this site, the most important thing about Barrett is that he’s Thyrza’s brother.  As a child, Barrett’s favorite way of learning was to watch his sister blunder into trouble and then avoid that behavior, or find a better excuse than she did.  Barrett cultivated an interest in storytelling from a young age.  He wrote about the adventures of Mighty Mouse, and emulated some of his favorite authors like Shel Silverstein and Dr Seuss.  This eventually developed into a love of stories, in whatever form they take.  Barrett shares his family’s love of gaming.  He’ll play just about anything except for MOBAs, because he’s just not very good at them.  As a teenager, Barrett developed several psychological disorders, the most life altering of which are PTSD and Panic Disorder (later developing into agoraphobia).  Although his condition drains his energy and saps his spirit, Barrett does his best to let his creativity continue to flow and lead a full life.  His loving family and girlfriend are instrumental to his recovery. 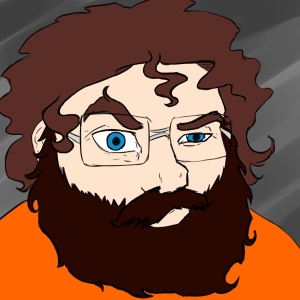 Brian is Thyrza and Barrett’s father.  He occasionally contributes when he feels like it. 🙂